Described as “the most successful ditching in aviation history” by a National Transportation Safety Board official, the flight came to be known as the “Miracle on the Hudson”.

There is even a wonderful movie about the story of this flight ‘Sully: Miracle on the Hudson”. The movie tells the story of US Airways Flight 1549 and the brilliant captain who managed to save every life on board.

Let’s take a closer look at flight 1549 to understand what happened. 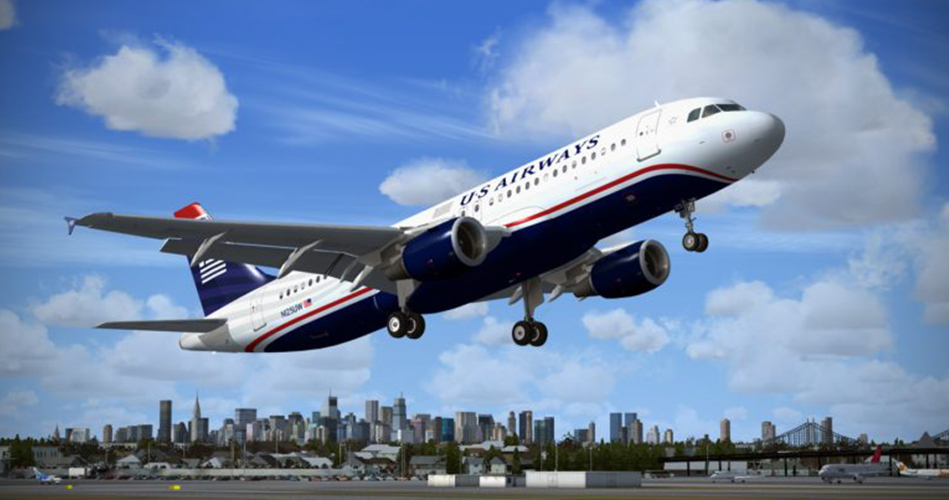 The aircraft used for the flight was an Airbus A320-214, powered by two turbofan engines. The duration of the flight was supposed to be around two hours.

There were 150 passengers on board. Plus, five crew members including pilot Chesley “Sully” Sullenberger, an experienced pilot with nearly 20,000 flying hours, and co-pilot Jeff Skiles, a first officer who had only recently completed his training on the Airbus A320 at the time. 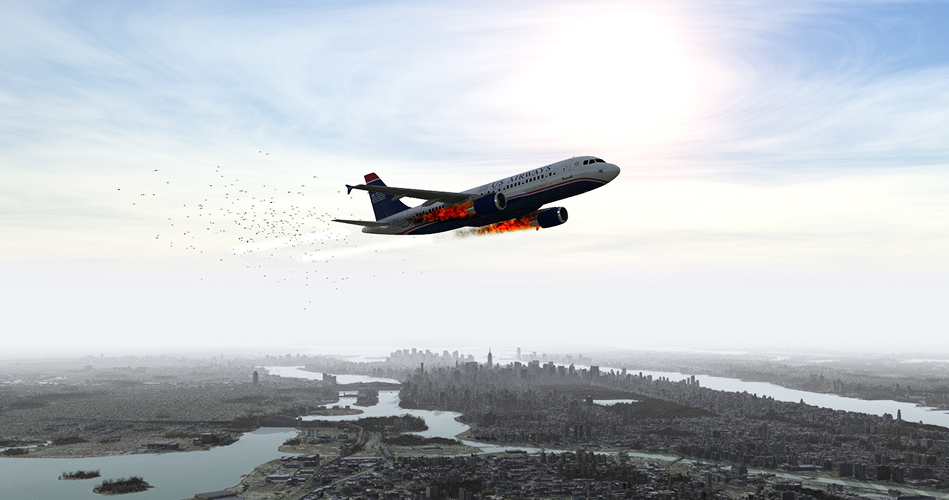 The flight was cleared for takeoff from LaGuardia’s Runway 4 at 3:24:56 pm. The crew made the first report to air traffic control at 3:25:51 after becoming airborne. They reported being at 700 feet and climbing, Skiles was in control.

At 3:27:11 the plane struck a flock of Canada geese at an altitude of 2,818 feet, about 7.2 km northwest of LaGuardia. The pilots’ view was instantly filled with large birds.

The birds, which were traveling at about 50 miles per hour, were sucked into both of the plane’s engines. Both engines flamed out and failed immediately.

Passengers and crew reported hearing very loud crashes and seeing flames from the engines, followed by silence and an odor of fuel.

The search for a runway: trial and error 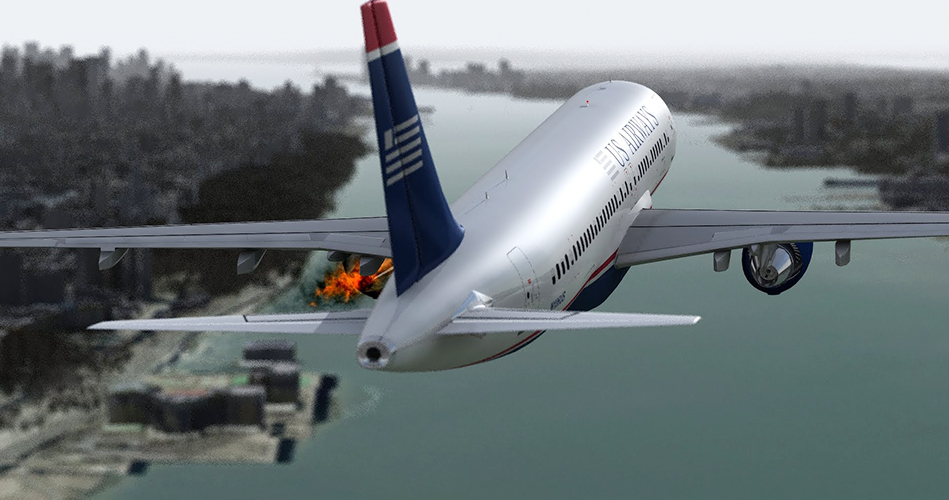 When both engines shut down, Sullenberger took control while Skiles worked the checklist for engine restart.

The aircraft slowed but continued to climb for a further nineteen seconds, reaching an altitude of 3,060 feet at an airspeed of about 185 knots, before starting to descent, accelerating to 210 knots.

At 3:27:33, Sullenberger radioed a Mayday call to air traffic control: “… this is Cactus 1539, hit birds. We’ve lost thrust on both engines. We’re turning back towards LaGuardia”

Permission was given for Teterboro’s Runway 1. However, Sullenberger had decided that this was not a viable option. He responded: “We can’t do it … We’re gonna be in the Hudson”.

Sullenberger commanded over the cabin address system, “Brace for impact”.

In the meantime, air traffic controllers asked the Coast Guard to caution vessels in the Hudson and ask them to prepare to assist with the rescue. 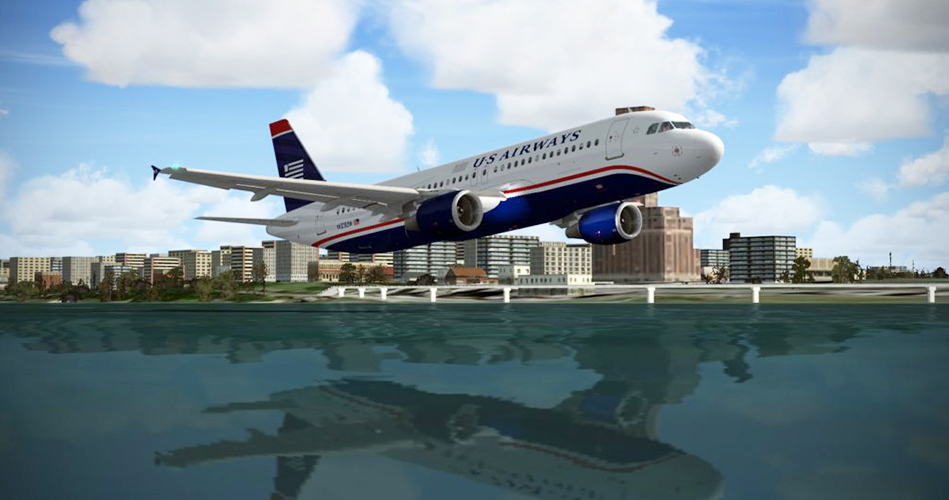 Sullenberger begins his glide towards the Hudson. The only major vertical obstacle in the way was the George Washington Bridge, which he clears with almost 900 feet to spare.

At 3:31 pm, the plane made an unpowered ditching, descending southwards at about 125 knots into the middle of the North River section of the Hudson.

Flight attendants compared the miraculous ditching to a “hard landing” with “one impact and no bounce”.

The Evacuation: everyone counts 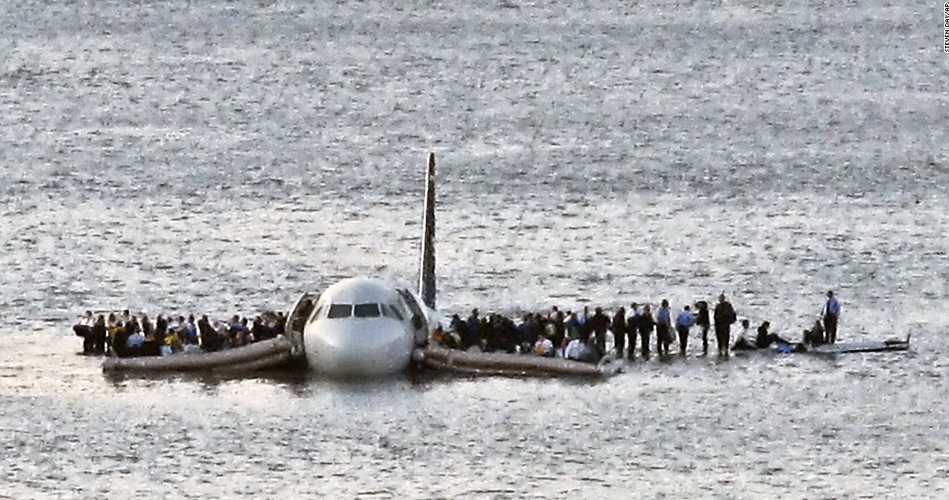 Sullenberger gives the evacuate command and the crew begins to evacuate all passengers onto the plane’s wings through the four mid-cabin emergency exits as the plane slowly begins to take on water.

The first rescue vessel takes only four minutes to reach the plane and begin offloading passengers.

Captain Pilot Sullenberger walks the entire length of the flooded aircraft twice to check that no passengers remain inside before exiting the plane.

The aftermath: Was all that really necessary?

An argument arose after the accident that ditching the aircraft might have been uncalled for, and that landing it was an option.

The Airbus Training Centre Europe in Toulouse performed simulations that showed the probability of making it back to LaGuardia Airport had Flight 1549 started the maneuver back to the airport promptly after the bird strike.

Nevertheless, such simulations did not take into consideration the needed time for the pilots to understand and evaluate the situation before taking action. This option also risked the plausibility of crashing within a populous area.

5 Times when emergency landing saved everyone on board