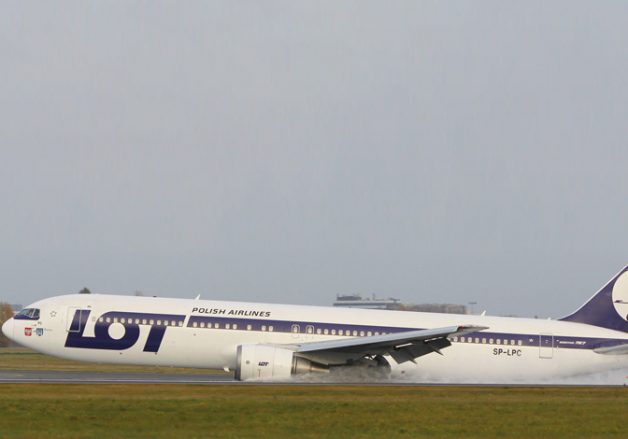 An emergency landing is a prioritized landing made by an aircraft as a result of an emergency. It usually includes a compulsory diversion to the nearest airport. Sometimes however, it is done in any given clear area or body of water.

Upon the declaration of the emergency, air traffic control must prioritize and give way to the aircraft immediately if it was to land in an airport.

If no airport is nearby, the success of the landing depends solely on the wits of the crew and their ability to think outside the box.

In forced landing the aircraft is forced to land as soon as possible, largely due to technical problems.

The pilot basically attempts to get the aircraft on the ground and avoid any injury to passengers on board. This might even be attempted in clear area of land when there is no runway nearby.

Forced landing may occur as a safety measure; meaning that the aircraft might still be flyable at the time of landing but must be landed immediately to avoid an imminent crash or ditching.

When forced landing occurs in an airport, the aircraft is often fixed and can probably fly again.

Ditching is forced landing on water. In this case, the aircraft will most probably sink eventually, or at least get permanently damaged. However, the point of ditching is saving passengers on board. They are often evacuated on rafts in wait for the rescue teams.

This four-engine Boeing 377 took off on a flight from Honolulu to San Francisco October 16th, 1956.

Two out of the four engines failed half way through the flight, this caused an increase in fuel consumption and the crew found that they do not have enough fuel to reach their destination.

The aircraft was ditched on the ocean; everyone on board survived the ditching and was promptly saved by the coast guard.

This domestic passenger flight took off from Montreal heading to Edmonton on July 23rd, 1983. The aircraft ran out of fuel midway through the flight, at an altitude of 41,000 foot.

The incident is commonly known as the Gimli Glider because the crew was able to successfully glide the Boeing 767 aircraft safely to an emergency landing at an old Air Force base in Gimli that had been transformed into a racing track.

There were no injuries neither among the 61 passengers on board or the people on the race track who witnessed the emergency landing.

Flight 009 was a scheduled British Airways flight from London Heathrow to Auckland with several stops along the way.

On June 24th, 1982, the Boeing 747 flew into a cloud of volcanic ash thrown up by the eruption of Mount Galunggung south-east of Jakarta, Indonesia, which caused the failure of all four engines.

The crew was able to glide the aircraft out of the ash cloud, and land safely at the Halim Perdanakusuma Airport in Jakarta.

Despite the major damage that happened to the aircraft, the crew was able to return to Detroit Metropolitan Airport and execute a miraculous emergency landing that only veered marginally of the runway, with no major injuries to anyone on board.

The most renowned ditching in aviation history, to learn more about this flight check this: