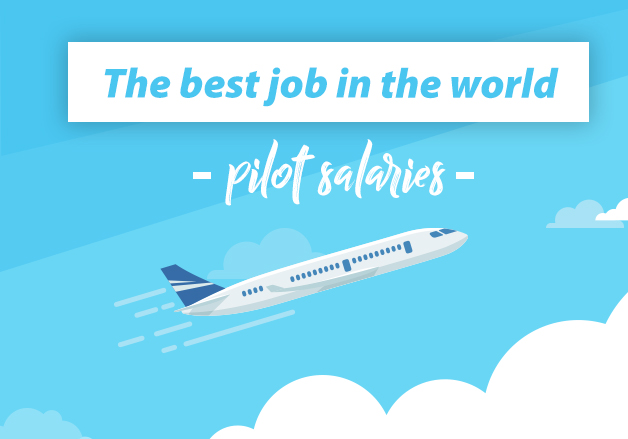 Most people are fascinated by airline pilot salaries, either as a factor to become a pilot or as a topic of conversation as it is a commonly known fact that pilot salaries are among the highest salaries in all known professions.

Moreover, pilot salaries, which are already high, are expected to increase further due to the shortage of pilots and larger demand for qualified pilots as a result of the major increase in air traffic taking place around the globe. That is why people are more fascinated than ever before.

Where do the truth end and the myth start though? We all know pilots salaries are very high, but how high exactly? That is, in fact, difficult to tell as their salaries largely depend on several factors.

Let’s check those factors and find out how can a pilot earn an impressive salary. Knowing the real deal about pilot salaries can help you decide whether this career is the right one for you.

What do pilots do?

Before discussing pilot salaries, we have to take a look at their job description to gain a better understanding of the job.

The duties of a pilot start long before the plane takes off. A pilot makes several important checks before any scheduled flight. Like checking the weather along the route, checking the plane’s condition, the total fuel required for the trip and the weight and distribution of passengers and cargo on the plane. A pilot must also file a flight plan before the plane starts moving.

During the flight, a pilot must monitor the plane’s instruments and monitor all radio communication to use incoming data for assessing and detecting any issues that might affect the flight. In addition to that, the pilot should communicate with air traffic control to receive and follow directions for taking off and landing safely on the assigned runway.

The pilot supervises all the personnel in the aircraft cabin and cockpit as well.

How are pilot salaries determined?

Unlike most other professions, Pilots and Captain Pilots do not earn a flat monthly salary. They are often paid an hourly wage for each flight hour flown instead, in addition to per diem.

Besides this hourly wage, a pilot often receives a fixed salary during the training period. They also receive per diem, which is compensation or allowance the pilots gets when away from home. This allowance is to cover meals and lodging when a pilot has to stay away from home overnight.

How much is this hourly wage?

Like all other industries, the more experience a pilot gets the more hourly rate he/she earns. As a rule, the top of the pay scale for pilots are captain pilots working for international airlines.

Typically, airline pilots start out making $40 – $70 per hour when they first start flying, and the average pilot logs 75 hours per month in the air. When you add per diem, this amounts to almost 7000$ per month for newly appointed co-pilots.

This hourly wage however largely depends on the airline, type of aircraft, and the pilot’s level of experience, captain pilots for instance often make $300 per hour.

They sometimes also log up to 150 hours per month performing ground duties like simulator training, maintaining records, performing pre-flight inspections and flight planning. All these hours are also paid with the same hourly rate.

Where does the difference in salary come from?

Pilot salaries differ according to the type of aircraft they’re flying. For example, a salary for the pilot of a large jet is impressively larger than a pilot of a small jet, while salaries of non-jet aircraft pilots are significantly less.

They also depend on the type of airline. Legacy carriers, for instance, the largest and oldest carriers often offer some of the highest pay rates for pilots. And even though low-cost carriers offer a less hourly wage, most pilots start by working for them until they gain the experience required for legacy carriers.

What does per diem mean and how much is it?

Per diem is the travel allowance airlines pay to pilots, it includes an hourly rate for their time away from the base, which is different than their flying hourly rate of course, but still comes to a sizeable amount per trip.

This allowance or compensation is paid by the hour, even if the trip takes several days. That is why it is usually a considerable amount of money. Even if the airline pays only 2$ per hour for new pilots, this comes up to 100$ extra cash for a 2-day trip. However, per diem is much more than that for experienced pilots and captain pilots.

How do salaries increase?

All hourly wages witness an annual increase. The largest increase in salary usually occurs after the probationary period which is typically one year for pilots.

In general, the biggest salary increase happens in the first five years, then there’s usually a percentage increase every year after that.

This increase is often due to the major shift pilots go through from first officers to captains, this often happens after several years of experience.

What does on reserve mean?

When a pilot is on reserve status for a period of time, this means the pilot is required to be on call for a while, either at the airport grounds or within a certain range of the airport. During this reserve period, a pilot is usually paid differently.

Keeping some pilots on reserve is some sort of insurance for the airline. It means that they have someone covering sick calls and schedule interruptions. For pilots, it means that they get some sort of pay just for staying near the airport for a few days. If they do fly during this time, they get their usual hourly rate.

Why are salaries rapidly increasing?

The world has undergone a global economic recession in the early 2000s, this has resulted in several years of instability in almost all sectors which meant a lot of mergers and downsizing.

In the last decade, however, airlines did not only recover from this recession, but the air travel industry is also healthy and growing at a fast pace. Following slow times, this speedy growth means a need to hire more employees and more pilots.

Airlines around the world are undergoing significant growth over this decade, especially in Asia and the Middle East. This means that airlines are hiring more pilots than ever, and this peak in hiring is only expected to grow as air traffic increases. This means that airlines need to be competitive with their pilot salaries to keep their pilots from moving to other airlines.

According to Boeing, the demand for commercial airline pilots is going to reach an anticipated demand for 617,000 new pilots globally over the next 20 years.