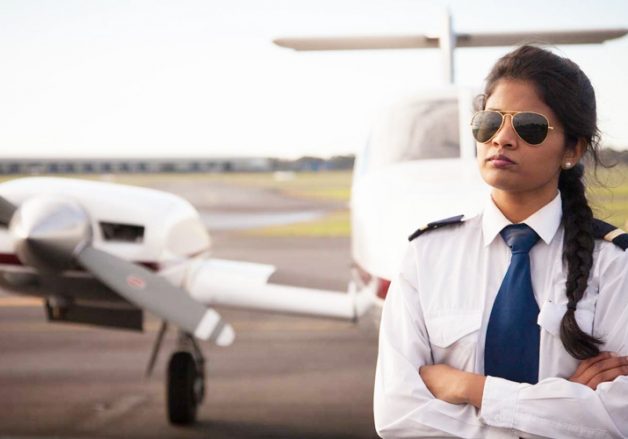 Saudi Shoura Council member Dr. Eqbal Darandari has called for the General Authority of Civil Aviation (GACA) and Saudi airline companies to support Saudi women working as pilots, co-pilots and flight attendants.
Empowering women in business and finance is a substantial part of fulfilling the Kingdom’s 2030 Vision, Darandari said, and required increasing women’s participation in the workforce, enhancing their economic role and providing fair and appropriate opportunities for them alongside their male counterparts.
“Lately, many opportunities have sprouted up for women in the aviation field; women are working in air control, occupying operational and administrative roles, which is good, but airlines take one step forward and two steps back when it comes to pilot and flight attendant positions,” Darandari told Arab News.
Darandari said increasing numbers of female students on scholarships were majoring in aviation and related sciences, and others who had valid pilot (and co-pilot) licenses were waiting because they could not use them in the Kingdom.
“Saudi women have already proven their worth in the aviation spectrum, and we’ve seen Saudi women piloting aircraft outside the Kingdom; now it’s time for the GACA to take the initiative. Saudi women deserve to find work in their own country, and it can start small, through piloting domestic flights,” Darandari said.
Darandari considers Saudi aviation companies’ focus on hiring only non-Saudi women unfair. “I don’t know whether it’s distrust or fear, or perhaps an exaggerated interpretation of religion, but withholding such opportunities from women under the guise of overprotectiveness is unheard of anywhere else in the world. As long as women are prepared and committed to the requirements and demands of such a job, why hesitate?”
Darandari said women throughout the world worked in the aviation field, including Muslims and conservatives, and that Saudi women were in no way less capable or qualified.
“Giving women the opportunity to pilot an airplane or tend to its flyers will enable many Saudi women to fulfill their dreams of being called a captain or flight attendant. Being religious, conservative and upholding traditions and customs never went and never will go against honorable work and the pleasure of serving one’s country. It’s about time we hear of captain Johara and flight attendant Moudi wishing us a pleasant flight.”
The article is courtesy of Arab News