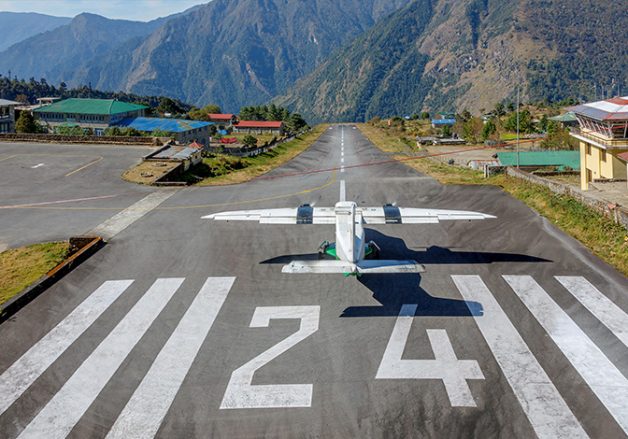 The International Civil Aviation Organization defines a runway as a rectangular area of land specifically prepared for the landing and takeoff of aircraft. Some airport runways are man-made surfaces, often made of asphalt, concrete, or a mixture of both, and some are natural surfaces such as dirt, gravel or ice.

Most runways look like a highway, just an industrial looking road leading to the airport. But some are treated as an entryway to the country. Whether by choice or chance these runways are spectacularly impressive.

Let’s check the most impressive airport runways around the world.

Offering a stunning landing and an even more stunning take-off, the runway in Marseille airport south of France sticks right out into the water of Etang de Berre.

You can take off and land amidst the azure blue water of this 155 square kilometer lagoon, which gives you a wonderful view from the plane.

In addition to that, it is the fifth busiest airport in France by passenger traffic and the third largest for cargo traffic. Not just a stunning view but also a hip and happening airport.

Named after the Genoese navigator and explorer Christopher Columbus, this airport features one of the most impressive runways in the world.

Genoa Airport is an international airport built on an artificial peninsula. The runway is built on reclaimed land over the Mediterranean. It offers spectacular sea views for passengers while landing and taking off. Landing is the most impressive though as the descent from the mountains behind the city adds a surreal touch.

The only airport in the world where scheduled flights use a beach as the runway, Barra Airport, which lies at the northern tip of the island of Barra in Scotland, opened in 1936.

Three runways are set in a triangle at the beach, marked by wooden poles at their ends. Flight times often change with the tide as these runways are usually submerged under the sea at high tides.

Agatti Airport is located on the southern end of Agatti Island in India, the takeoff and landing offer an unparalleled view which no passenger will ever forget.

This airport features one asphalt runway, 1204 meters long and 30 meters wide constructed over the sea.

Madeira International Airport, or Cristiano Ronaldo airport, is an international airport in the Portuguese archipelago of Madeira.

It is one of the most dangerous airports in Europe, only expert pilots can navigate the runway set between rocky hills and ocean.

The runway has been extended 655 feet in 2003. The new extension is a spectacular bridge supported by 180 columns, each 230 feet tall, overlooking the ocean. It looks impressive from all angles!

The airport was renamed as Madeira International Airport Cristiano Ronaldo in 2017, in honor of the famous soccer star that was born in Madeira.

The smallest commercial airport in the world, this airport lies on the Caribbean island of Saba, Caribbean Netherlands.

The impressive runway is suspended precariously on a tiny shelf of land. On either end of the extremely short 1,299-foot runway is a 60-foot cliff-drop straight into the ocean. Not an easy runway for novice pilots, but a spectacular view for passengers.

Durres Lake Aerodrome Durres Lake Airport is a privately owned ice runway located on Durres Lake in Nunavut, Canada and is built entirely on ice, many travelers find this landing scary. This airport is open from January to April and mainly works on mining gold.

The airstrip on top of the world:

In early 2014 the new airport was opened on top of the mountains in Heqi City, Guangxi Province, southern China, it is truly one of the strangest airports in the world because dozens of hilltops were bulldozed to pave the way for the airport, which was built at an altitude of 2,221 feet above sea level, the runway is 1.36 miles long and can accommodate three flights per hour.

Seaplane airstrip inside the city:

Vancouver is home to the largest water airline company in the world, where seaplanes fly constantly at high speed and then land admirably on the water, after getting off the plane, the traveler is in downtown Vancouver is among the tallest skyscrapers in the city.

The airport for star John Travolta:

John Travolta’s home in Ocala, Florida, has two designated runways, so much so that you can fly directly from within his property, which makes sense for a man who owns seven planes including a Boeing 707, one Boeing 727 and three planes. Gulfstream.

For more about airports see also:

Aviation in the Kingdom: Newest airports in Saudi Arabia