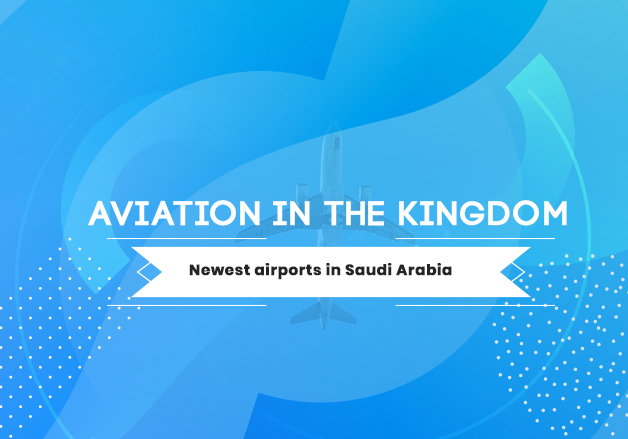 The aviation sector in the Kingdom has been showing impressive growth over the past years. in 2017, Saudi Arabia recorded 8% passenger growth, and the numbers are rapidly increasing.

Furthermore, the domestic market is currently served by five airlines, as opposed to only two airlines a couple of years ago. This significant progress in the aviation sector is, of course, accompanied by building new airports and developing the old established airports in the kingdom.

Airports in Saudi Arabia are varied, ranging from the largest airport in the world, to small domestic airports, and most of them are modernly built and feature great amenities and facilities.

So let’s take a tour around some of the airports in Saudi Arabia and check the latest additions to the aviation industry in the Kingdom.

Under construction airports in Saudi Arabia 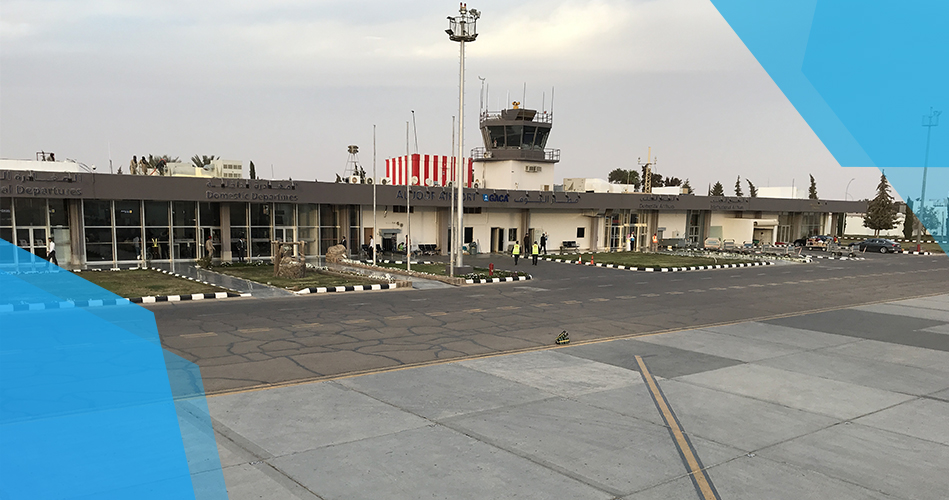 Work has started on two state-of-the-art airports at Al Jouf and Al Qurayat areas within the northern region of the kingdom.

When the projects are completed, the two airports will accommodate a combined capacity of 1.5 million passengers per year.

The Kingdom is also working on a project to develop King Abdullah International Airport Jizan. After development, the airport will have the capacity to handle 2.4 million passengers per annum. It lies in a strategic location between Jizan and Jazan Economic City. 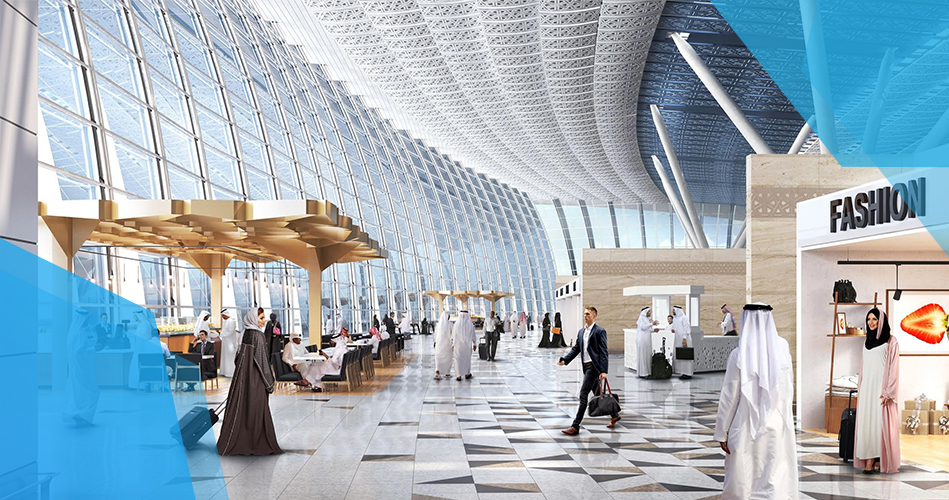 The new airport has been soft-launched last summer and has been welcoming some commercial flights since. However, the expansion is expected to be completed in 2025.

The soft launch included the opening of 6 passenger gates, but when completed, the airport will operate 46 gates with the option to add more if needed.

The original airport was inaugurated in 1981, but it has been recently expanded and developed.

The three-stage expansion project started in 2006. It is designed to increase the capacity of the airport from 13 million to 80 million passengers per year.

Spreading over an area of 15 square kilometers, King Abdulaziz International Airport is the third-largest airport in Saudi Arabia. It is also the busiest airport in the kingdom and the largest by passenger traffic.

This airport is mostly renowned for The Hajj Terminal, which is one of the largest terminals in the world. Extending over a vast area of five million square feet, The Hajj Terminal can accommodate 80,000 passengers at the same time. This one of a kind terminal is innovative and eco-friendly, it has received several awards for the imaginative design which combines air-conditioned halls and shaded open areas covered with an elegant tent-like white roof.

The expansion project includes a brand-new passenger terminal, the largest air traffic control tower in the world, an electronic passenger guidance system and a stormwater drainage network. The existing runways and airfield systems will also be upgraded. 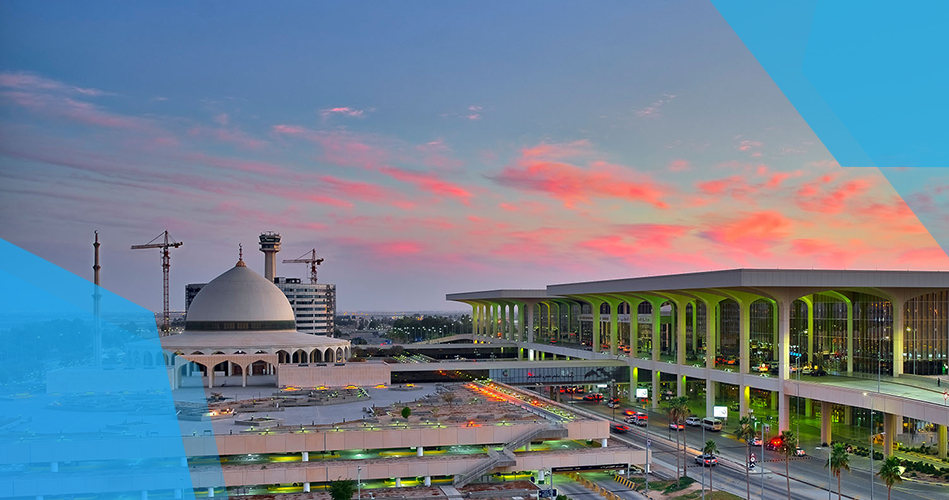 Already the second largest airport in the Kingdom, King Khalid International Airport is currently being expanded. Construction of the new expansion is scheduled to be completed in 2019.

The project includes refurbishing and expanding the existing Terminals 3 and 4 and increasing their capacity from 15 million to 25 million passengers per year. Terminal 3 serves as a domestic airport and terminal 4 will work as an international airport. The new project includes integrating both with the addition of a central building. The integrated design is set to make connected flights a very smooth operation.

The expansion project also includes the construction of a new fifth terminal, in addition to linking the airport with the new metro system in Riyadh.

King Khalid International Airport was opened in 1983. And through the years, it has witnessed one expansion in 2016.

As it features the second largest allocated area for an airport in the world, King Khalid International Airport was an alternative landing site for NASA’s Space Shuttle.

The airport also features one of the tallest control towers in the world, as well as two parallel 4,260 meters runways. 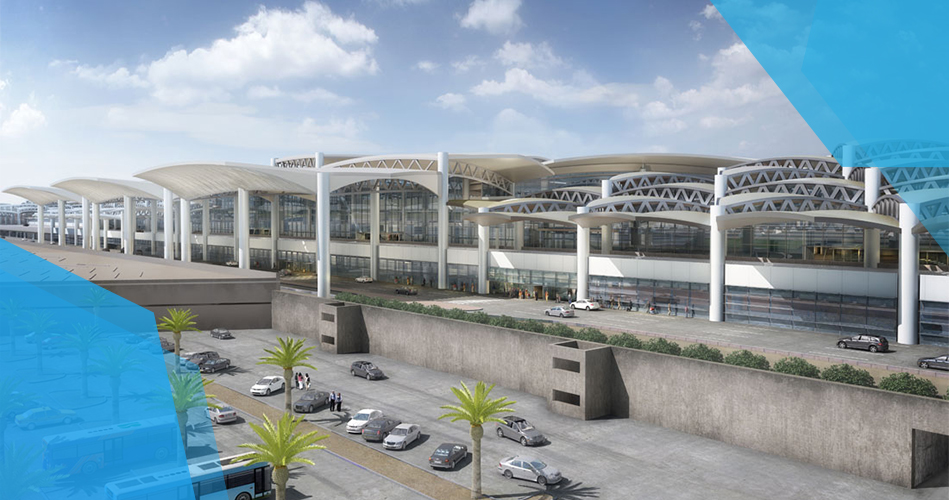 Opened for commercial operations in 1999, King Fahd International Airport is considered to be one of the newest airports in Saudi Arabia. It is also the largest airport in the world in terms of area.

Spreading over a massive area of 780 square kilometers, the huge area of the airport facilitated the landing of the largest aircraft in the world; In 2009, an Antonov 225 landed at Dammam Airport. It was transporting oil drilling equipment.

Not all the area is currently utilized. The kingdom has more development plans for this airport.

The spacious airport is also home to OxfordSaudia, the first certified pilot training center in the GCC.