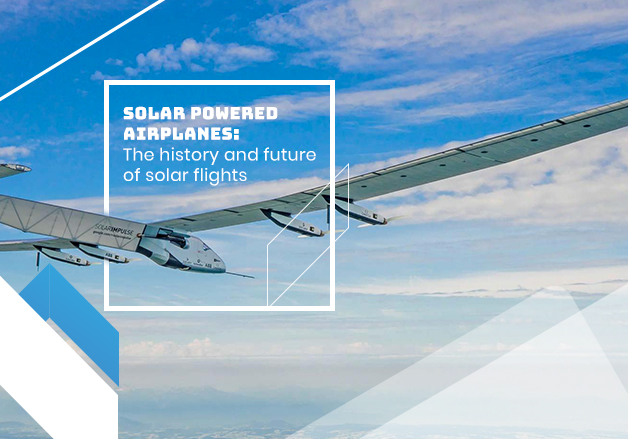 There is no doubt that the potential of solar flights and solar powered airplanes has gained momentum with the completion of Solar Impulse 1 and 2, the outcomes of the eponymous solar airplane project. However, the usage of solar flights is not a too-recent trend in aviation.

Sure, the ongoing modern global direction towards renewable and clean energy has helped accelerated its progress, but the fact of the matter is that the first successful solar powered flight to ever take place happened more than 4 decades ago.

And we say successful because reports of early attempts to fly aircraft using electricity date back to the 19th century.

Here, we demonstrate the history of solar aircraft from the date of the earliest known successful solar flight till today, as well as the foreseen future of this field. 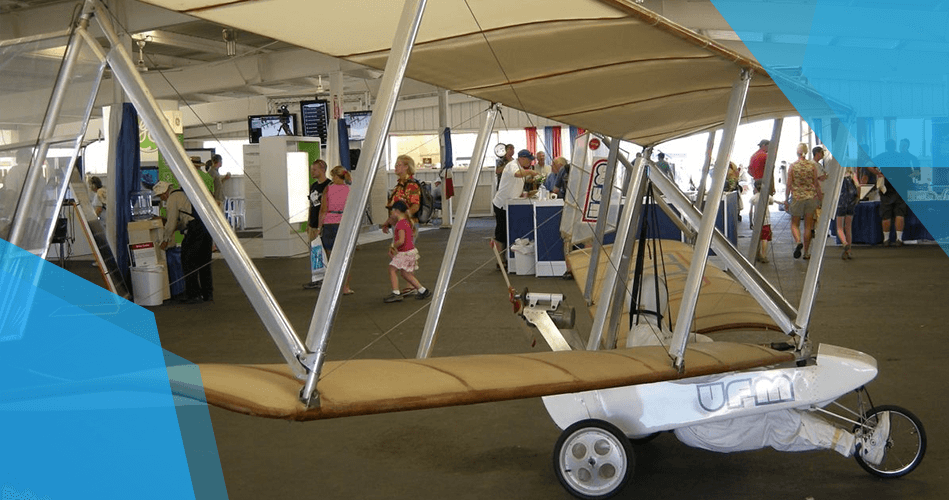 Although Mauro Solar Riser was the first manned airplane to do a solar flight, it is not the first solar powered airplane to fly in history. On 4 November 1974, AstroFlight Sunrise took off unmanned from Bicycle Lake in California state.

How did Mauro Solar Riser work?

The aircraft was powered by a 3.5 hp Bosch motor connected to a 30V nickel-cadmium battery pack which was in turn charged by photovoltaic solar panel array installed on its top wing to provide 350 Watts.

Manufactured by Ultralight Flying Machines, Solar Riser was capable of flying for 3 to 5 minutes after having its cells charged for 1.5 hours; the aircraft’s speed could reach up to 32 kilometers per hour. 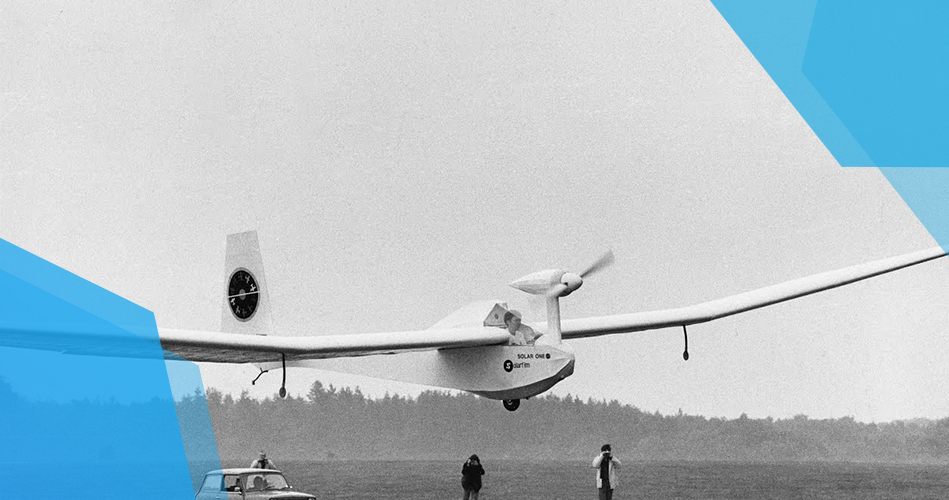 Even though the first Solar One aircraft was produced in December 1978, four months before the take-off of Mauro Solar Riser, it did not take off before June 1979.

With the total production cost of 16,000 euros, the most expensive component of Solar One was its 750-solar cell array whose value alone mounted up to 6,000 euros.

Piloted by Ken Stewart, Solar One took off in its first successful attempt on 13 June 1979 where it flew at 65 kilometers per hour for around 1.2 kilometers.

The second flight for Solar One took place on the same day, where it was manned by Bill Maidment who flew it at its maximum speed, 78 kilometers per hour.

How did Solar One work?

Solar One had four Bosch motors installed – each with a power of 1 hp, which were wired to a 24-cell battery pack charged by the aforementioned solar cell array. 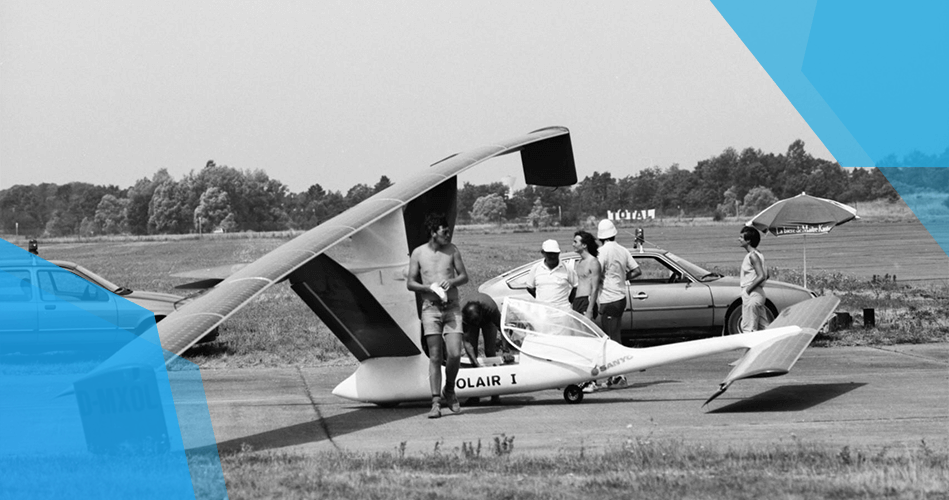 A made-in-Germany solar aircraft, Solair 1 utilized 2,499 solar cells with a capacity that ranges between 2.4hp and 3.0hp. The first trip of the first prototype of Solair took place on 21 August 1983, and it lasted for 5 hours and 40 minutes.

The prototype is now displayed in the German Museum in Munich. 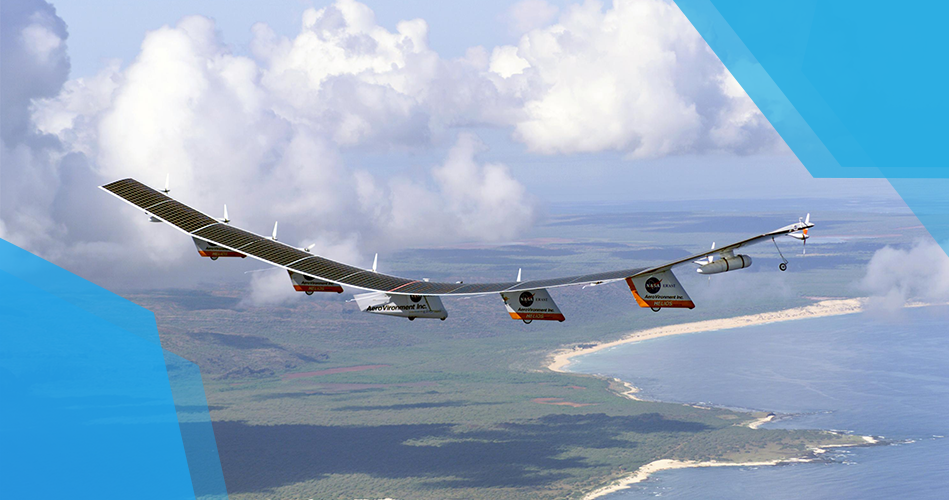 Over the 90s, NASA has launched many lesser-known solar empowered aviation ventures and projects as a part of its Environmental Research Aircraft and Sensor Technology program (ERAST).

With the aim of developing low-cost unmanned electric airplanes to take out science missions like communication support and atmospheric studies at altitudes of more than 60,000 feet, ERAST produced several solar-empowered aircraft.

Helios, the last model developed by ERAST two years before its termination in 2003, traversed the sky at an altitude of 96,963 feet.

Solar Impulse – the Present and Future: 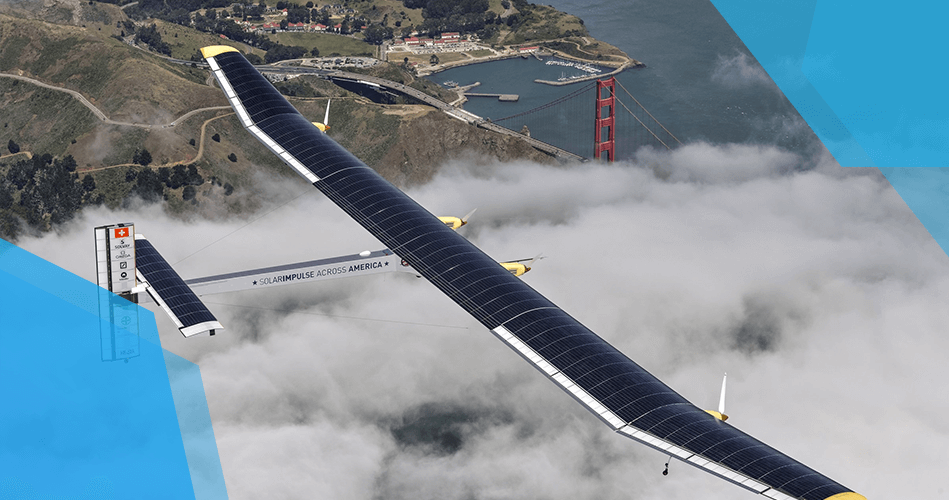 In the recent rise of and need for clean energy, the Swiss project known as Solar Impulse was launched in 2003 by Swiss engineer André Borschberg and balloonist Bertrand Piccard; the program’s objective was to develop single-seated fixed-wing solar powered airplanes that have the ability to circumnavigate the globe. 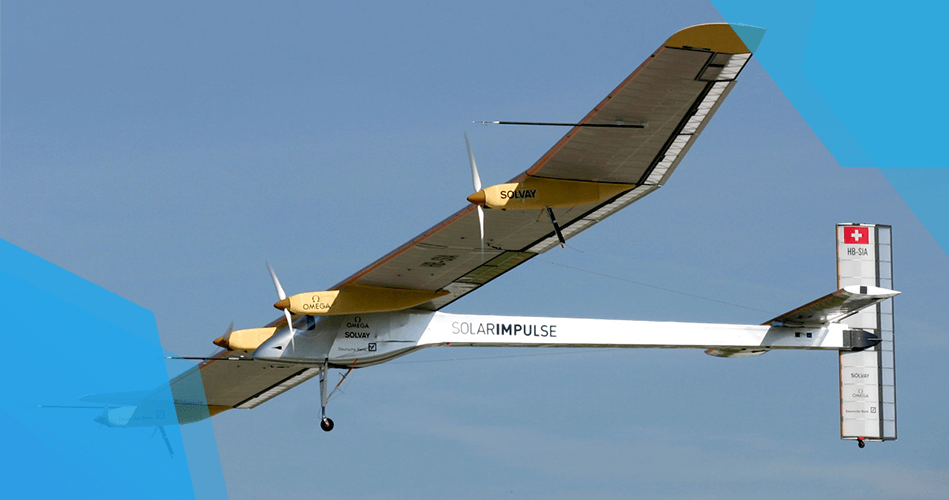 Solar Impulse 1, the first prototype of the project, completed its first test flight in December 2009 covering a distance of 350 meters about 1 meter above the ground. The flight’s goal was to test the aircraft’s specifications.

The real test for Solar Impulse 1 came around four months later, on April 2010, when Marcus Scherdel piloted it for 87 minutes at an altitude of 1,200 feet.

In the following months, the prototype succeeded in making the first trip in which it charged its batteries within the flight (May 2010) as well as completing its first overnight trip which lasted for 26 straight hours at an altitude of 8,600 meters, setting the record back then as both the longest and highest manned solar powered flight to be made. 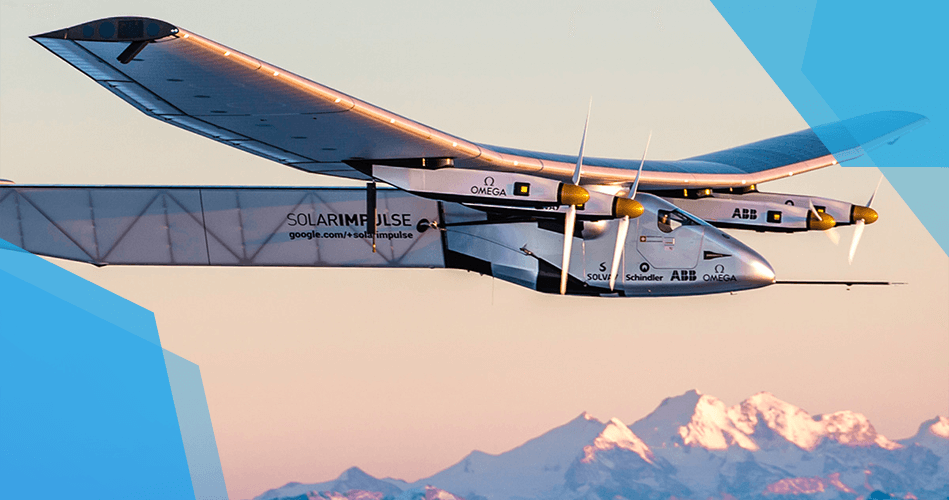 Almost one year later, on 13 May 2011, Solar Impulse 1 took off from Switzerland towards Brussels, the capital city of Belgium, in its first international flight.

The trip spanned 13 hours where the airplane traversed a distance of 630 kilometers with an average speed of 50 kilometers per hour and an average altitude of 1,800 meters. 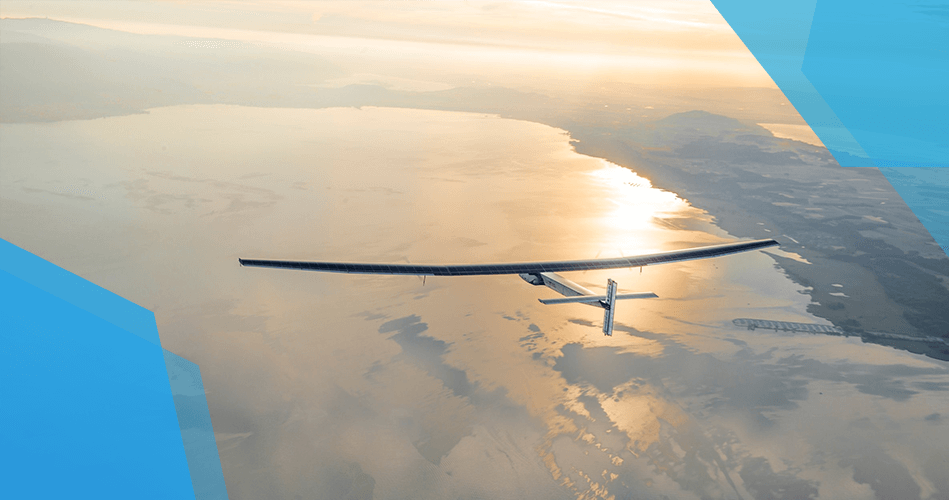 The first intercontinental flight for Solar Impulse 1 took place on June 2012 when the solar powered airplane flew from Madrid, Spain to Rabat, Morocco in a 19-hour flight.

Solar Impulse 1 utilized 4 electric motors powered by 4 Lithium-Ion batteries, each with a capacity of 7.5 kilowatts; the batteries were charged by 11,600 solar cells installed on the aircraft’s upper wing.

The airplane’s speed could reach up to 70 kilometers per hour, with an endurance of 36 hours and a maximum altitude of 12,000 meters. 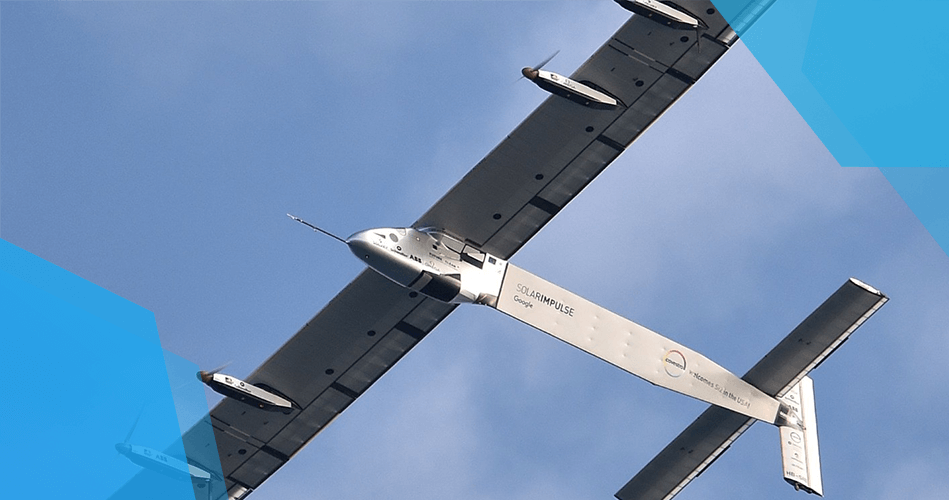 In 2011, the Solar Impulse program began working on building its second eponymous aircraft and completed it in three years.

Solar Impulse 2 featured many advanced technologies and specifications that were not in its predecessors like an autopilot system and an oxygen mask, enabling the airplane to fly at an altitude that can reach up to 12,000 feet.

As for performance specifications, Solar Impulse 2 was considered a significant leap forward for solar powered airplanes. The aircraft has a maximum speed of 140 kilometers per hour, almost double that of Solar Impulse 1.

This was made possible by the aircraft’s upgraded power plant which comprised four electric motors connected to four lithium-ion batteries charged by 17,248 solar cells installed on its 72 meters long wing. 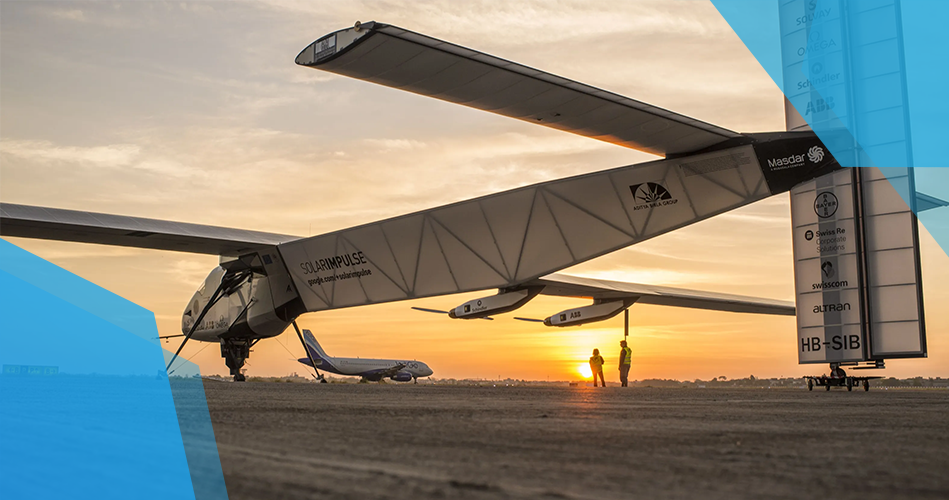 Solar Impulse 2’s first take-off occurred in 2014, where it reached an altitude of 1,700 meters and traveled at an average ground speed of 56 kilometers per hour.

In October of the same year, Solar Impulse 2 completed both its first night flight and its first flight at maximum altitude. 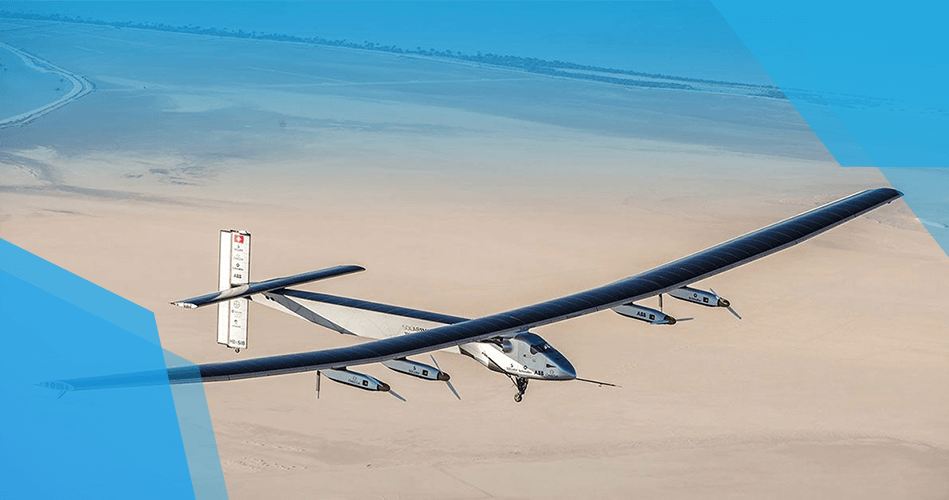 Between the years 2015 and 2016, Solar Impulse 2 headlined the global aviation industry news when it embarked on a round-the-world circumnavigation which started on 9 March 2015 and concluded on 23 July 2016.

Over the course of  490 days, the solar powered Solar Impulse 2 traveled an accumulated distance of 43,000 kilometers in a total flight time of 550 hours (22 days and 22 hours) during which it produced 11,000-kilowatt hours.

In the tour, Solar Impulse 2 traveled across 18 cities located in Asia, Africa, Europe, and North America and over two oceans (the Pacific and the Atlantic) and three seas (the Mediterranean Sea, the Red Sea, and the Arabian Sea).

Sure enough, Solar Impulse’s circumnavigation has broken 19 records, including the Longest Solo Flight in an Airplane which was set by the aircraft’s flight from Japan to Hawaii, piloted by André Borschberg. 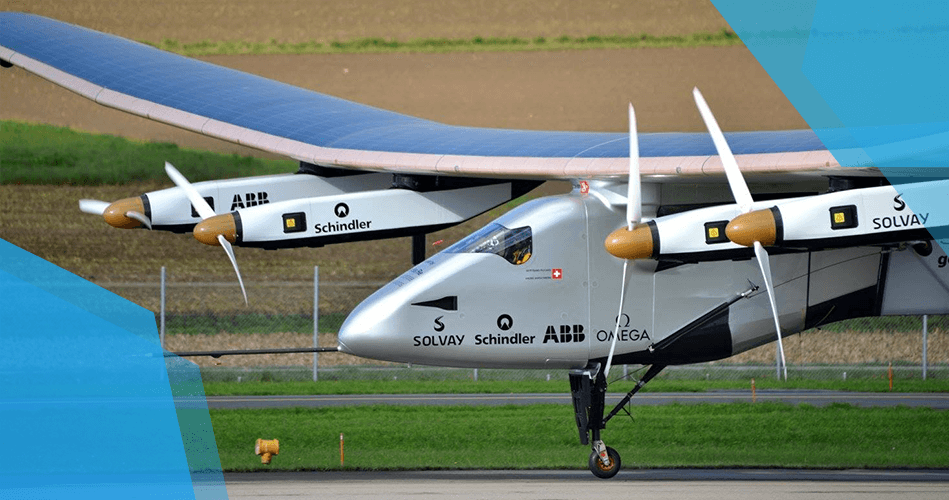 In 2016, the program announced its plans to develop a third Solar Impulse airplane that would be able to accomplish some of the tasks usually done by satellites. It is still unclear when we should expect to see the new prototype.

Clearly, the biggest advantage of solar powered flights, and the factual main purpose of developing them is that they depend on a clean form of energy that causes zero harm to the environment.

Solar energy is a clean, free, and renewable source of energy, which gives it a grand advantage over fossil fuel.

Though this is true for all types of aircraft, weather changes impact traditional flights to a less extent than it does solar powered flights.

While the weather can delay the schedule of traditional aircraft or make flying it a more difficult task, solar powered aircraft will not be able to fly except in specific weather conditions – especially in long-distance flights as it would need to recharge while it is up in the air.

While the energy source in itself is essentially free, the equipment and technologies required to harness and utilize solar energy are extremely expensive considering the scale on which it would need to be used to fly single-rider aircraft, let alone the commercial-use airplanes.

The shift towards renewable energy sources generally, and in the aviation industry specifically, is indeed a positive step towards preserving the environment and decelerating climate change. However, solar powered airplanes have a very long way to go before they can act as a complete alternative for fossil fuels.

That being said, solar aircraft in its current and predicted future forms, can still be useful in fields like atmospheric research and communications. We can always use less consumed fossil fuels.